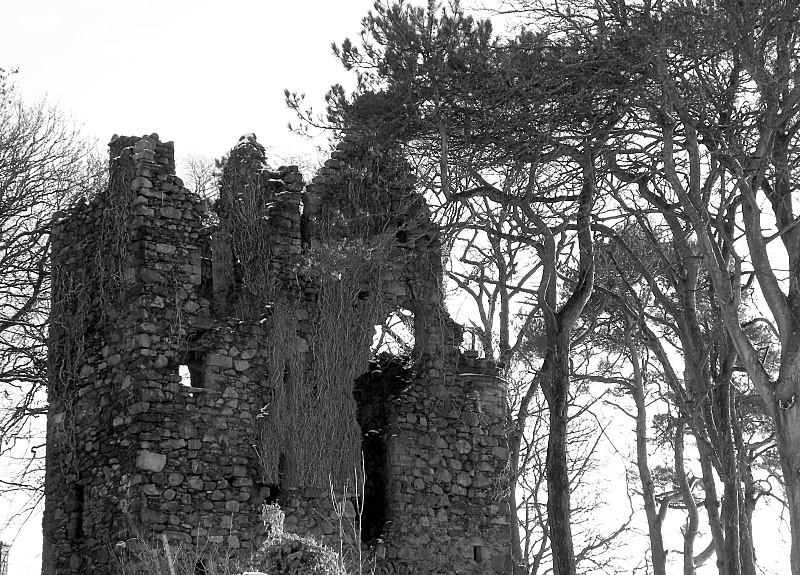 To say Pinwherry is as old as the hills is no exaggeration. The History of this area starts as far back as the dawn of early civilisation. There is ample proof today to show that this part of the world was occupied by man during the Stone Age.

The name Pinwherry and the many place names in the district are Gaelic or an ancient form of Gaelic and vividly descriptive of the characteristics of the countryside. Pinwherry itself means “The hill in the hollow, surrounded by hills, where the waters meet”; these waters being the Stinchar and the Duisk. It is not a village in the true sense of the word, consisting rather of clusters of houses or clachans.

The first group of houses probably grew up round the ancient keep of the Kennedy family, known as Pinwherry Castle. Another group was around the lands of Almont, a very important part in the old days, as they continued the “knoll of the fire signal”. Poundland or Pinlan as the natives of the district call it – and this is said to be the true name – probably grew up round the Mountain Kirk or the Cameronian Church and manse. This was a Reformed Presbyterian Church started up after the storming covenanting years, by those who did not wish to return to the Established Church. The first mention of it as a building is 1812, and during its lifetime it served a wide area including Girvan. It was finally disbanded in 1874, but the building still remains having been converted into a dwelling house. Around the time that the church was built, there was also to be found at Poundland a smiddy, a joiner’s shop, a wayside inn and a heckling factory.

Another part of Pinwherry is Drumgrier – meaning the blacksmith’s ridge. There stood the blacksmith’s shop which many people can still remember. Opposite was the local joiner and cartwright and just south was the local builder Mr McQuaker of Sixpence, who was responsible for the building of the schools, mansion houses and many of the farms in the parish for many generations. At the north end of Pinwherry we come to Daljarrock meaning “field of the oaks”. Daljarrock House was also a stronghold of the Kennedy family. It is also said that parts of the house and cellars were used to store contraband brought there by smugglers. Until after the Second World War it was a private dwelling house. Thereafter it became a hotel; the first owner being James Barke, the author of a number of books on Robert Burns.

Yet another group of houses was to be found at Muckfoot along with a busy joiners shop, and beyond, a ford over the River Duisk leading to the forge at Drumgrier and the road south.

The most recent group of houses in the area is probably what is now known as the village, and the siting of the railway station near here probably accounted for this. Round about 50 years ago, this was a busy little place – indeed it was known as “the land of milk and honey”, with the creamery on the one side of the road, and Drumspillan House on the other with its rows of bee-hives. Built by the late W.S. Brechin it was tragically destroyed by fire in 1924, and still stands, a gaunt ruin, overlooking the Stinchar Valley. It is interesting to note that a daughter of the late W.S. Brechin was a founder member of the Barrhill W.R.I. probably the oldest in the district.

A short distance beyond the station stands Ash Cottage, where Mr Gallagher and his two sons had a thriving carriers business and in addition to carrying passengers to and from the station to Colmonell and Ballantrae also ran a taxi-service and could even provide a hearse! In the early days the conveyance were horse-drawn, but later became mechanised. Animals for market were walked to Pinwherry station and loaded in to cattle trucks and went by rail as did the milk, until the Creamery opened, when this was discontinued.

Coming back into the village we find the Village Hall, on the site of the old Creamery, always a hive of activity. Mr McCulloch along with his fiddle, held dancing classes. The early part of the evening was devoted to teaching the children and from 8 o’clock onwards the young adults took the floor. Whist Drives, dances and film shows – Charlie Chaplin being a great favourite – were also held in the hall. Next door to the hall was the Post Office and then the General Store, with four assistants, which conducted business from 8 a.m. – 6 p.m. – 9 p.m. on Saturdays! Prior to this the Post Office had been in Drumspillan Cottage. Early in the 1920s the hall was converted into the creamery and the adjoined Post Office into the Creamery Office. Local farmers had shares in this new enterprise and quite a little business grew up in cheese making and milk collecting – the milk being transported to Glasgow by lorry. In the early thirties the creamery closed its doors and quite a bit of money was lost.

When the Village Hall was taken over local functions were held in the school. Then in 1924 Mr Dunlop of Fardenreoch organised the men and boys of the countryside in a voluntary capacity. The site of the present hall was obtained and everyone set to work to level the ground, cart gravel and building materials and lay foundations. The joiner work was done by two local joiners, David and Gib Campbell, and Whist Drives and other functions were held in the school to pay for materials and any paid labour required. And so our present Community Hall came into being.

In the old days too, Toll houses with turnpike gates were set up by Act of law – the revenue being used for the upkeep of the roads. Such a toll house was to be found at Daljarrock and here the tolls were collected form traffic to and from Girvan. Another was situated at Pinwherry bridge for travellers going to and from Barrhill. Many people trying to evade paying the tax used the ford at Almont and joined the old back road opposite Pinwherry Home Farm, but Check Toll was built to catch the dodgers. Beside the Almont ford was a swing footbridge for pedestrians and another was to be found south of Drumgrier for pedestrians going to and from the water of Muck Road.

In the educational field the first thing that must be mentioned is the John Snell Memorial built on the “Knell of the Fire Signals” at Almont and bearing the following inscription:- ’Near this spot in 1629 was born John Snell, son of Andrew Snell, Smith in Almont, Scholar, Soldier, Lawyer, he rose by diligence and prudence to high office in the State, being seal-bearer to Charles II.’ He died in Oxford in 1679. To his memory this monument was, by public subscription, erected in 1915. John Snell bequeathed the Snell Bursary to Balliol College, Oxford, to enable Scottish students to continue their education there. Although to date there is no education record to equal that of John Snell, Pinwherry did not lack in educational establishments. There is on record Sixpence Academy, there the pupils brought their fees plus peats for the fire. The first records of more recent schools are dated round about the 1860s and here again fees were payables:- 1/- for 4 weeks of reading 1/6 for writing and arithmetic, 1/6 for grammar and geography, 1/8 for Latin. Coal money had also to be paid. At this time the schools were run by the Church but in 1873 they were handed over to the School Board. There was also a building at Lincumtoy and then came the building near Pinwherry Castle, built on land known as Castle Field, gifted by Gilbert McClung. This building has recently been reconstructed into a very delightful dwelling-house. The present school was built by Mr McQuaker of Sixpence, and was first occupied in 1898 – the removal from the old school being carried out over a week-end when books and furniture were transported from the old school to the new. In the present School there is a tablet on the wall of one of the rooms which could be termed Pinwherry War Memorial. On it are the names of all the pupils of the school who lost their lives in the 1914-18 war and also the names of those who served in it and were fortunate to return home.

There are a great many places of archaeological and historical interest in the countryside round Pinwherry. High on the farm lands of Docherneil, on the part known as Glake, is a spear-shaped standing stone. Docherneil burn rises near here and the name means ‘the bum of the spear-shaped tombstone’.

Glake also means “the ripple-shaped tomb-stone”. This stone is visited frequently by archaeologists and in their opinion dates back to 2000 B.C. It has cup-shaped and soup plate markings (archaeological jargon) and is also an ancient calendar. On Midsummer’s day, the shadow of the stone should point directly to Knockdolian Hill.

Early in this century a stone-age burial cairn was found at the bottom of Lincumtoy burn, where it meets the River Duisk, and inside was a perfect ceremonial axe head. There must be many more things of archaeological interest waiting to be discovered in these parts. On the moorland farm of Mark, for instance, is an area called Kilbride, clearly marked on Armstrong’s map which was produced about 200 years ago. Several years ago an old shepherd’s wife, who had lived her life in the peace of this unspoiled countryside, vowed she could see the ruins of a church and grave mounds on the land of Kilbride, especially if there was a light covering of snow. She was a well-read woman, and had conversed with many a scholar. It seems feasible that there may be something to discover and unearth here.

Finally, perhaps, a word should be said about the old farming families found in the Pinwherry area around and after the Covenanting days. During the ‘killing times’, John, James and Gilbert Milroy, who farmed beyond Barrhill, were persecuted for their faith. Their crops and farms were burned, their animals driven off the land and finally they themselves were captured and deported to Jamaica as slaves. After ten years Gilbert was released and retuned to this country and eventually started farming at Piperknowes on the Water of Muck. At one time every farm on the Muck Water was farmed by a Milroy, and to this day the names John, James and Gilbert remain in the families.

This is by no means a complete account of Pinwherry’s history. It would be quite impossible to do justice to such a subject in a few pages of writing but it is hoped that the little information gathered together here will give interest and pleasure to its readers.

Doubtless it will also give rise to much discussion and even disagreement among the older members of the district. This in itself will be a good thing, if only to arouse a greater interest in our own community.