This is part of an article that appeared in the Carrick Gazette, Friday, 3rd June, 1988. 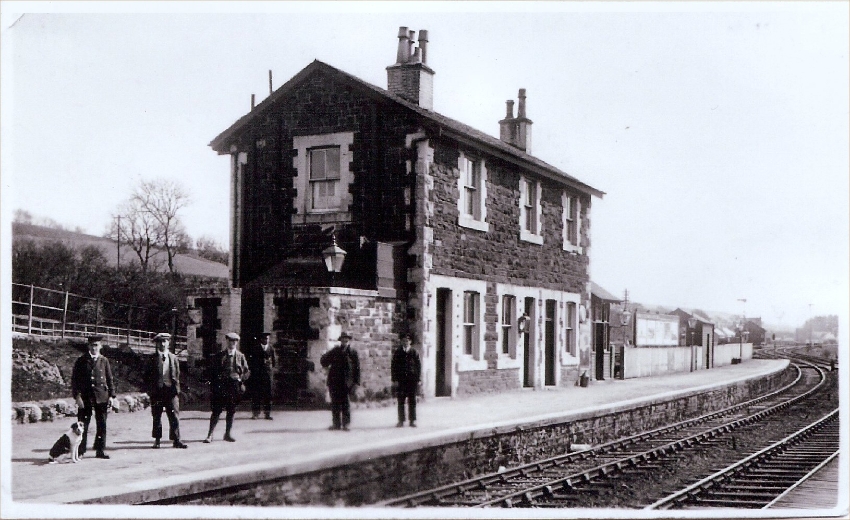 This was Pinwherry Railway Station in the 1920s. From the left to right: The station master, Mr Anderson; station clerk Mr John Watson who was a rabbit trapper. He was sending rabbits away on the train on the day this photo was taken. At the back is a signalman – not part of the usual railway crew. To the right of him is the plate layer Mr John Anderson and next to the rails is Mr Bobby Campbell. David Campbell was a signalman and in this photograph, a porter.

Looking back to the days when fourteen milk carts attended the station every morning Pinmore and Pinwherry come into focus this week and I spoke to an ex-postman, an ex-blacksmith and an ex-farmer to get help with the history of their two communities.

Pinwherry has had three halls altogether. The first one was converted into houses which are now referred to as the Hall Cottages. They used to be a hall and caretaker’s house. Mr Campbell’s parents lived there.

The second hall in Pinwherry came about in around 1920 (Mr Campbell’s father was present at the opening). “But it didn’t last too long” said Mr Campbell. The hall we are referring to here is the long white building next to Pinwherry shop and post office. It became a farmers creamery after that. A group of local farmers clubbed together and converted the building to make cheese. The Milk Marketing Board took it over and about eight people were employed there.

Cheese was being made in that building around 1935 – “but that didn’t keep going very long either” said Mr Campbell.

Bear with me – this building has been versatile. The County took it over next and it was a roads depot. Now it is owned by Mr Allan Rodger and is part of the post office. And herein lies another tale.

But first, in order not to leave Pinwherry hall-less, Mr Campbell told me how the present hall/Community Centre came about. Simply it was by public subscription and volunteers. Pinwherry Community came up with the money and volunteers went to the site at night and dug the foundations and prepared the site for the builders. And the gravel used to make the concrete for the building came from the River Stinchar.

Pinwherry Post Office has flitted around the village like a neurotic socialite. It was originally at Daljarrock (in the space where the two roads meet there). Then it moved to the back of what is known as Drumspillan Cottage. It popped over the road to the house next to the phone box in Pinwherry. Then Mr Willie Love provided it with a more stable home in his garage and grocers shop complex.

Its relatively stable home was knocked down and it moved again to where it is now, in the middle of the village. As an aside, Miss McBlain ran the post office when it was at Drumspillan Cottage. When she became Mrs Walker, the post office moved with her to set up home in its new building next to the phone box. 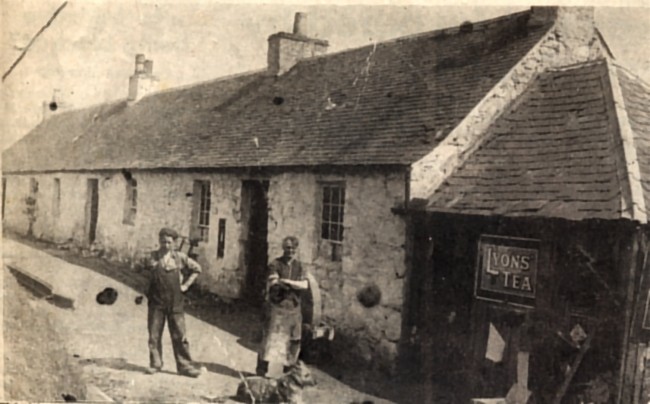 This big smiddy is now a ruin at the A714 Tormitchel junction. Picture taken about 1935, and the smiddy closed in 1957.

Mr Allan’s shop and post office used to be McCrindle’s, the grocer. It was “very busy” said Mr Campbell, Mr McCrindle’s van used to go out loaded and be out for the whole day remembered Mr Campbell. It used to travel to Girvan, Maidens and Barr before returning to Pinwherry.

Back at the phone box was the gate into a vital part of Pinwherry’s economy – the railway goods station.  “The railway made Pinwherry an important place because it was serving the valley”  said Mr Campbell. Farmers carted milk to the station to send to the creameries, J. and H. Linden were the coal agents who kept coal in the station and who used the railway then too.

Mr Campbell remembers beer barrels coming in for the Colmonell and Ballantrae hotels. “It was a Busy station” he said. It closed in the mid-60s and one person lives in the station building now.

Buses served Pinwherry too. Jock Gallacher (and we’ve met him before in Ballantrae) operated one of the bus businesses. He lived in Ash Cottage just outside Pinwherry. He was “a character.” Liked a wee dram Iseemed to remember – “just a drop in the bottom of a pail” replied Mr Campbell. Mr Gallacher was squeezed off the road when the Caledonian took over said Mr Campbell. And Mr Walker (we also met him in Ballantrae) operated the first Caledonian bus from the King’s Arms in Ballantrae. It went from Stranraer to Girvan via Ballantrae and Colmonell. The Pulman bus did the Newton Stewart Girvan route and they amalgamated to become SMT.

Apart from the larger than life Mr Gallacher, farm workers, estate workers and railwaymen lived in Pinwherry. Children went to school where they go to school now. The school was built at the turn of the century and “in the 1920s when I was at school there were about 70 children,” remembered Mr Campbell.

True to form in Pinwherry, the school was once in what is now a cottage owned by the Rev Jim Guthrie. It is at the end of the row of cottages on Barrhill Road where Mr Campbell lives

Spiritual needs were – and still are taken care of by hiking the three or so miles to Colmonell Parish Church. But Pinwherry came up trumps when it came to football – there were two football teams, Pinwherry and the Duisk Rovers. Mr Campbell remembers one of the Pinwherry team. They used to play in summer leagues. The evenings’ entertainments required as much energy as games of football. Dances were held at Ballantrae, Colmonell, Barrhill and further afield, and those members of Pinwherry who were fleet of foot hiked, biked (or caught a pony and trap) to get to them. “In those days there wasn’t as much travelling,” said Mr Campbell. “You had to make your own entertainment.” They truly were energetic about their entertainment. If you are still not convinced, Mr Campbell reliably informed me “There was never a Friday but there was a dance on some place or another – and on Wednesdays too.” And there was none of your eight hours sleep a night malarkey either. These dances started at about 7.30-8.00 p.m. and went on until 2 a.m. (then you had to hike, bike or pony trap it home again you’ll remember). “And it wasn’t any standing in the middle of the floor shaking, you got round it.”   Mr Campbell told me severely. Sometimes whist drives were held before the dances.

Pinwherry keeps up its dancing. Dancing classes are held in the community centre on Tuesday evenings. Mondays are reserved for ‘Keep Fit.’ Badminton is played in the Community Centre on Wednesday evenings, Thursdays are Brownies and Guides. I don’t know if Friday is a day off. Carpet Bowls are also played.

“There wasn’t much football really after the War,” said Mr Campbell. The dances continued, but are now much less frequent. The Brechin family of Pinwherry House used to proved a Christmas party for the schoolchildren every year. The children still have a lovely time. The Community Association throw a Christmas party for them and give each a present. They also organise a summer picnic. And the WRI hold a Children’s Hallowe’en party. 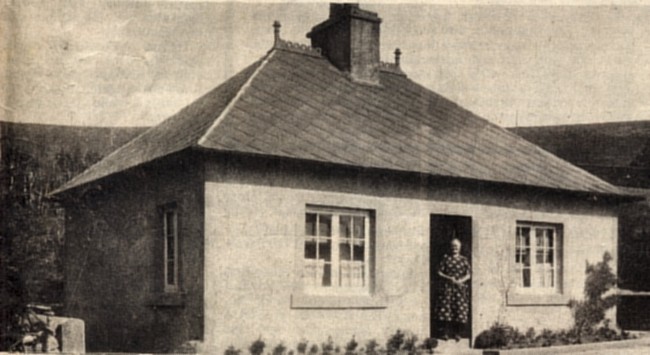 This is the old Toll house in Pinwherry which no longer exists. It used to sit at the sharp corner just before crossing the bridge.

I was almost saying goodbye to the Campbells to wander up to Pinmore pastures new, when Mr Campbell told me about Pinwherry Castle “just out the back window!” It is believed to be one of the Kennedy castles. At the top of each of these Kennedy castles you could see the next one. And the one next to Pinwherry was Poundland. Pinwherry Castle is “a harbour for crows now” said Mrs Mary Campbell. But other big houses have survived despite the odds in the Pinwherry area. McQuaker of Sixpence (which is between the road and the railway in Pinwherry) built Drumspillan House for the Brechin family. A fire around 1927 gutted the house and killed two members of the White family living there. But the house is lived in once again. It is now a bungalow. Other big houses employing many Pinwherry people were High Alticane, Poundland and Pinwherry Houses. 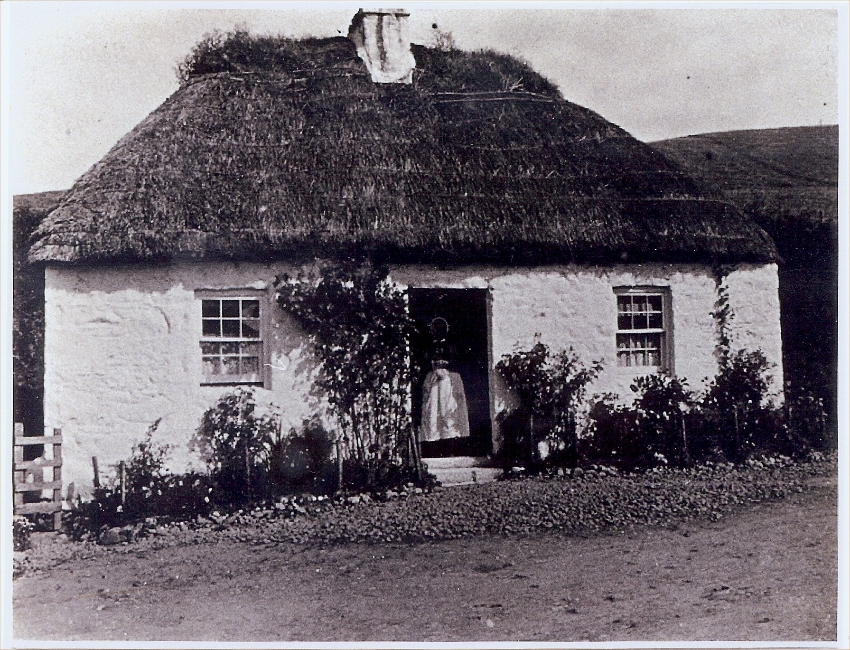 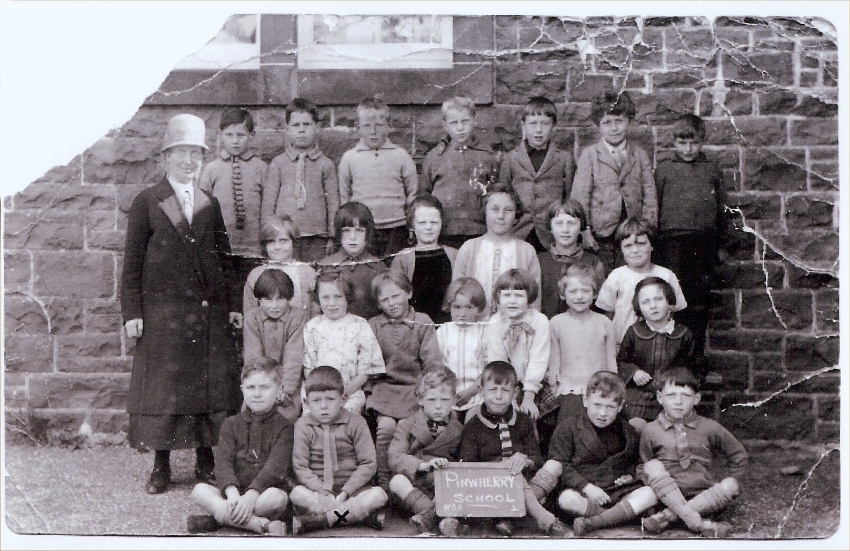