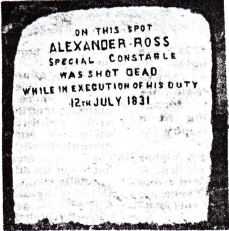 This Memorial Stone can be found on the west side of the A77 about mid-way between the Railway Bridge and the roundabout at the north end of Girvan. It originally stood where the roundabout is situated at the former junction of the A77 and the Old Dailly Road. With the re-alignment of the A77 in 1984 the stone was removed to a nearby field and in 1986 it was again moved to its present position.

Although Special Constable Ross was killed in the execution of his duty on 12th July 1831 by a Maybole man during an Orange Walk which developed into a riot, the affair was only part of a larger series of events and public disorder in Girvan from 25th April until 11th October 1831.

The trouble started on 25th April when Reform Movement protestors, paraded through the town and were attacked by members of the Orange Movement. For the next six months there were continuous running battles between the two factions even though the Reformers were of no particular religious persuasion and there were many casualties on both sides.

On the day Constable Ross was murdered several other constables and people from the town were severely injured. Samuel Waugh, the Orangeman who fired the shot that killed Ross, was later arrested at Suie on the Newton Stewart Hill Road having made his escape to there by way of the village of Barr.

Special Constable Alexander Ross, a fisherman to trade, was buried in Old Street Cemetery and his grave is marked by a low stone of obelisk design surmounted by a ball and spike.

Samuel Waugh, the only person to be convicted with the murder of Ross, was a middle aged Irishman who resided in Maybole and he had been a former soldier in the Downshire Militia. He was hanged in public at Ayr Prison at 2 p.m. on 19th January 1832 and his body was sent to Edinburgh for disection. Five thousand members of the public attended the execution and the scaffold was guarded by a large body of police and a detachment of Ayrshire Yeomanry.