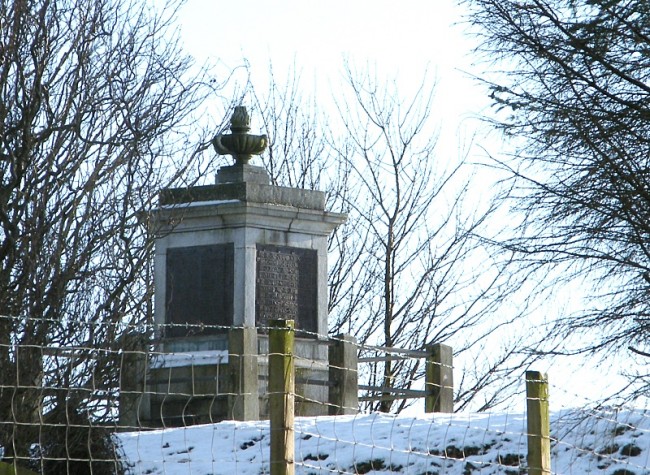 Just to the southwest of the picturesque village of Pinwherry is Almont Farm where you will find a substantial monument to Sir John Snell, one of Scotland’s greatest educational benefactors.

Sir John Snell (1629 – 6 August 1679), founder of the Snell Exhibitions at the University of Oxford was born in Ayrshire Scotland, the son of a blacksmith working at Almont, a hamlet in the Ayrshire parish of Colmonell, on what is now Almont Farm at Pinwherry.

Snell was enrolled at the University of Glasgow for the 1642-3 session, and stayed there for two or three years, but did not take a degree, and travelled south to fight for the King in the English Civil War. He fought in several battles, including the Battle of Worcester.  Thereafter he took refuge in Cheshire and by 1654 he was in the service of Sir Orlando Bridgeman. He became his clerk, being raised to the offices of court-crier and seal-bearer as his patron was promoted to those of Lord Chief Justice of Common Pleas 1660-8, and Lord Keeper of the Great Seal 1667-72. Snell continued as seal-bearer to Bridgeman’s successor the Earl of Shaftesbury. Later he was secretary to the Duke of Monmouth and had the management of his Scottish estates.

He accumulated a substantial fortune, no doubt partly from the perks of office, but he was already a man of means before holding any official position. This fortune of obscure origin he invested in the Manor of Ufton, Warwickshire, which he bought from William Spencer in 1674. He gave books during his lifetime to the University of Glasgow, which conferred an MA degree on him by diploma in 1662.

Snell made his will in 1677. Its main provision was to put the Manor of Ufton into the hands of Trustees, for the maintenance of Scottish students from Glasgow at Oxford, continuing philanthropy along these lines he had already begun informally. The Master of Balliol was to be one of the Trustees ex officio, but Balliol (then a College of relatively little consequence) was not otherwise mentioned in the will. Balliol was, nevertheless, the natural base for Snell’s legacy – partly because of its Scottish associations through Dervorguilla of Galloway and her son King John Balliol, and partly because Balliol already had some Exhibitions for Scots from the will of John Warner, Bishop of Rochester.

Snell died at what is now 31 Holywell Street, Oxford on 6 August 1679. He was buried in nearby St Cross Church: there was an inscribed marble gravestone, but it was covered or destroyed in Victorian times. He left a bequest for sending students from the University of Glasgow to an Oxford college or hall. The Court of Chancery decided in 1693 that Balliol should receive the beneficiaries. Adam Smith was one beneficiary of the Snell Scholarship.

A scheme was eventually worked out for the Glasgow authorities to nominate young men to Snell Exhibitions tenable at Balliol, but no requirement to take Holy Orders (this being frustrated by the 1690 re-establishment of Presbyterianism in Scotland) or to return to Scotland was enjoined on them. Snell had wanted these conditions (which were derived from the Warner Foundation) enforced by a stiff financial penalty.

The first four Snell Exhibitioners were sent from Glasgow and admitted to Balliol in mid-1699. There was bickering, distrust and litigation from the outset. Consistently comfortable relations between Balliol and Glasgow were only achieved this century, but this did not generally bother the Exhibitioners themselves, who included James Stirling the mathematician; Adam Smith the great political economist, author of The Wealth of Nations; Matthew Baillie of Morbid Anatomy fame; AC Tait, Archbishop of Canterbury; Robert Blair VC; Edward Caird, Master of Balliol; and one of the College’s greatest Benefactors, JS MacArthur.

(From Wikipedia, the free encyclopaedia)

The Snell Exhibition is an annual scholarship awarded to a student of the University of Glasgow to allow them to undertake postgraduate study at Balliol College, Oxford. The award was founded by the bequest of Sir John Snell in a will made in 1677, although the original stipulation referred to the University of Oxford, rather than Balliol in particular. Snell died on 6 August 1679, but wrangling over the will meant that it was nearly twenty years before the first scholarships were awarded; the first four Snell Exhibitioners were admitted to Balliol in mid-1699.

Snell had been a Royalist in the Civil War, and was later secretary to the Duke of Monmouth and had the management of his Scottish estates. He intended the bequest to be used to educate Scottish clergymen for the then-established Scottish Episcopal Church. By Adam Smith’s day, the bequest was mostly regarded as an educational charity, though its exact status was not settled until later. “By the will of John Snell his exhibitors were under bond to take Anglican orders and return to Scotland, but the penalty was not enforced in the case of Adam Smith and numerous others.” (Fay, quoting the Times obituary of Smith.) Snell is buried in St Cross Church, next to Balliol’s graduate centre, Holywell Manor.

Each year, there is an annual dinner held at Balliol and attended by delegates of Balliol, Glasgow and St John’s College, Cambridge, in honour of the foundation.

The college currently (2009?) has three funded Exhibitioners. An election will take place to allow a student to commence study in October 2010. The current students are: Hayley Jayne Hooper, Lesley Jackson; and Christopher William Miller.

WI Addison, The Snell Exhibitions from the University of Glasgow to Balliol College, Oxford, 1901.

In 1999, as part of the celebrations of the tercentenary of the Snell Foundation, an exhibition of Snelliana (biased somewhat in the direction of Adam Smith) was staged at Balliol. An illustrated catalogue was produced: John Snell’s Exhibition 1699-1999 (ISBN 0 9512569 4 7). Copies are available from the author.