Minutes of CC and 2 Pins Meetings 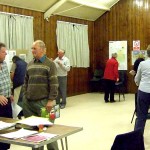 Minutes of the Meetings held on Thursday June 20th and July 18th 2013 at 7.30pm in Pinwherry Community Centre.

Minutes of the Meetings of Members held on May 9th and June 13th 2013.

List of future meetings in 2013, to which all are welcome:
On the 3rd Thursday of each month except July and December
Held at 7.30pm in Pinwherry Community Hall